New Delhi : Infosys co-founder Narayana Murthy has been trending on the social media for almost a day now after pictures of him touching Ratan Tata's feet landed on the social media. The two industrialists shared the stage at the annual TiECon event in Mumbai on Tuesday.

Narayan Murthy presented an award to Ratan Tata and soon after that bent down to touch his feet as a sign of respect. Ratan Tata shared the video of the incident on Instagram.

"It was an honour to be awarded by TIEcon at the hands of a great friend Mr Narayana Murthy," wrote the 82-year-old while sharing the video that shows Mr Murthy, 73, presenting him with the award and then touching his feet. 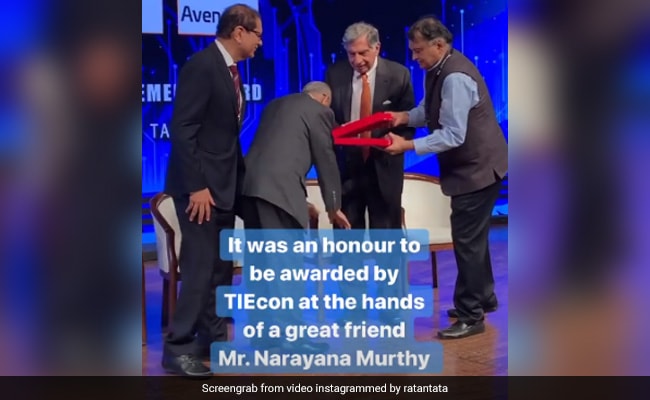 The event organizers shared the pictures on Twitter and people gave applauds for the kind gesture, rarely seen among the two market leading companies.

According to news agency PTI, Ratan Tata was honoured with the Lifetime Achievement Award at the 11th edition of TiECon Mumbai.

"Sri Ratan Tata's lasting legacy is the highest standards of ethics and integrity that will guide entrepreneurs in their journey for decades to come. The awardees of the Hall of fame have shown exemplary courage, passion and foresight in being disrupters who have created wealth and opportunities for thousands," said Atul Nishar, President, TiE Mumbai.