'We will succeed': Sanjay Raut tweets Hindi poem from the hospital bed

Mumbai : Shiv Sena leader Sanjay Raut tweeted a Hindi poem emphasizing on they will succeed, a day after receiving setback from the governor on extending the deadline to form government in the Maharashtra.

He tweeted the poem from his hospital bed, where he was admitted on Monday after complaints of chest pain. 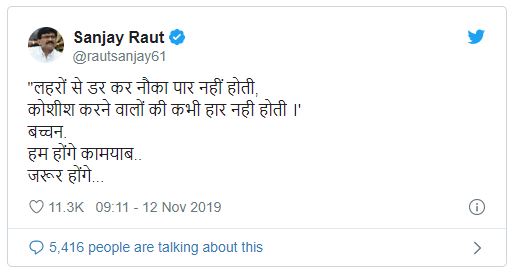 Meanwhile, Shiv Sena leader Uddhav Thackeray said that both NCP and Congress have agreed to "in principal" support to Sena-led government. After Governor's refusal, NCP (third largest party in polls) received an invite to form the government.