Mumbai : Sushant Singh Rajput’s elder sister, Shweta Singh Kirti, has revealed why their family has not yet demanded a CBI investigation into his brother’s death. Shweta was responding to a fan who encouraged her to seek a CBI probe into the matter.

It may be noted here, a fan requested Shweta and her family to request for a CBI investigation into Sushant’s death and said that the entire country will support them. Replying to the comment, she wrote, “We were waiting for Mumbai police to finish the investigation and come up with their reports.” 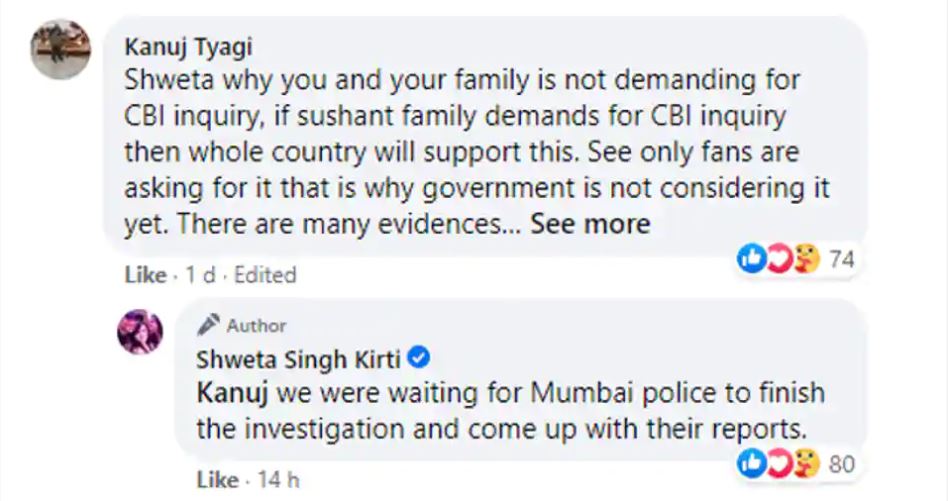 The Mumbai Police are currently investigating the case and have recorded the statements of at least 38 people, including Yash Raj Films’ Aditya Chopra and filmmaker Mahesh Bhatt. Dharma Productions CEO Apoorva Mehta recorded his statement on Tuesday.

Sushant died by suicide on June 14. According to his post-mortem report, the cause of death was asphyxia due to hanging.

Since then it has been alleged that professional rivalry may have driven Sushant to take the step.

On Monday, Shweta recalled about her childhood memories with Sushant and shared screenshots of their chat on June 10. “I am experiencing bouts of pain. Right when I think I am coping with it better, some or the other incidence rushes right back into my memory and breaks me apart,” she wrote.

Part 1: I am experiencing bouts of pain. Right when I think I am coping with it better, some or the other incidence rushes right back into my memory and breaks me apart. One such memory I am sharing with you all... because it is said that the more you share your grief, the less it hurts. I have always been told by my family members that Mom and Dad wanted a son, more so because Mumma’s first child was a son and she had lost him at the tender age of one and half. I never got to meet my first sibling. But mom and dad were very hopeful for a second son.... they made a sankalp (mannat) and started praying to Maa Bhagwati for straight 2 years. They fasted, they meditated, they did puja, hawan and went to spiritual places and met spiritual people. But then I was born, on a Diwali day.... Mumma considered me very lucky and often called me Lakshmi Ji. They continued with their Sadhna, and a year later my little brother was born. Right from the beginning he was a charmer, he mesmerized everyone with his beautiful smile and twinkling eyes. So, this little one was my “Pithiya”. This is a term used in colloquial Hindi to signify the one who comes right after you. Mumma believed that I was the cause of his much-desired arrival into our lives and I accepted the honor whole heartedly. I was very protective about my little brother because I felt I was responsible for bringing him to this earthly plane. We were always time together, We played, danced, studied, did all sorts of mischiefs, ate, slept, did everything together so much so that people forgot we were 2 separate individuals, they even called us “Gudia-Gulshan” as if we were a single entity (Bhai’s nick was Gulshan and mine Gudia) And when we started going to school, we had to go to different classes. Bhai’s Nursery and my prep classes were in same building so we managed our 1st year of school pretty well. But then my UKG class was in a different building and his prep classroom remained in the same building, so we got separated. One day after lunch break was over I saw Bhai in my classroom, in my building. We were just 4/5 year olds then. #BhaikikahaniBehankizabani #Downthememorylane #LuvuBhai

Find the perfect pair of jeans without trying them on using this hack shared by TikToker, Billie Newland
Veteran actress Kumkum dies at 86
Top News