'Pick up my phone', says Salman Khan to Shah Rukh Khan in his birthday wish

New Delhi : Social media was bombarded with thousands of wishes on Shah Rukh Khan's 54th birthday. His one of the close friends Salman Khan also wished him singing the Birthday rhyme along with his Dabangg crew. At the end of the video, he says, pick up my phone I have been calling you.

Check out the video below:

Shah Rukh Khan responded to Salman's wish by commenting on the post. The actor wrote: "Thank you Bhai. Aapko bahut miss kiya aaj. But you were making people happy in Hyderabad which is my mom's city. Love you and thanks for the wishes. Come back fast so I can get a birthday hug from you." 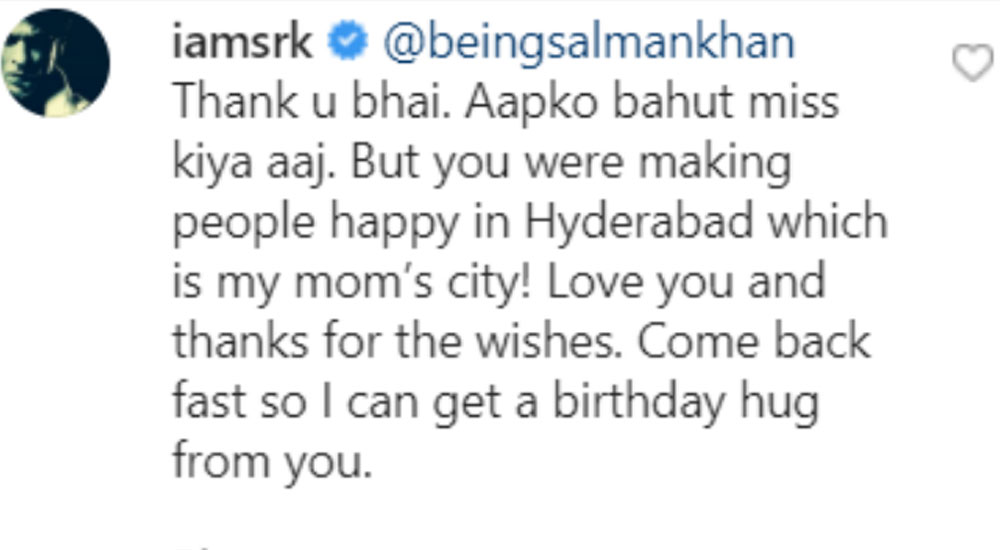 Shah Rukh Khan and Salman have co-starred in films such as Karan Arjun, Karan Johar's Kuch Kuch Hota Hai and Hum Tumhare Hai Sanam.. Both the actors frequently make cameo appearances in each other's films. SRK made a special appearance in Tubelight, Salman had a cameo in SRK's film Zero.