According to the information received, an inspection was carried out on September 23 at Garg Plastics, by officials of the Sub-Divisional Magistrate (SDM), Punjabi Bagh. During the inspection, the officials found that the trader was selling/manufacturing/storing/using plastic carry bags. 18 Kgs of which were found to be of less than 50 microns in thickness. 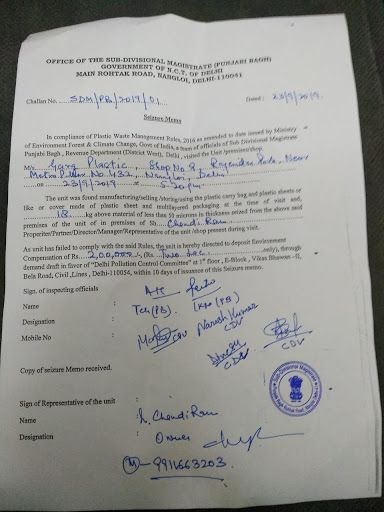 The shop, as per SDM team, was found violating the amended Plastic Waste Management Rules, 2016, and was imposed a fine of Rs 2 lakh. The fined amount will need to be cleared within 10 days of receiving the challan.

The news has come at a time when India is moving towards banning a complete use of plastic, a government initiative that comes into effect from October 2, the 150th birth anniversary of Mahatma Gandhi.

The use of plastic with a thickness of less than 50 micron, was, meanwhile, banned by the National Green Tribunal in August 2017.

I react only when it is needed: Priyanka Chopra on Salman Khan trolls
Antigua PM promises to hand over Mehul Choksi back to India
Top News