#HugeSupportForAsaramBapuji trends in the middle of nowhere

New Delhi : In the middle of nowhere, followers of Asaram Bapu, convicted in rape case, started pouring support for him on a social media platform. #HugeSupportForAsaramBapuji was seen trending on Twitter on Sunday morning.

Despite being found guilty in a rape case, his followers believe that Asaram has been framed in the matter. 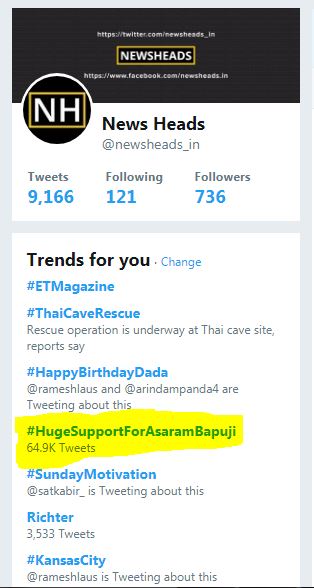 A week ago, he had moved an application in the Rajasthan High Court against his conviction, PTI reported. The appeal said the trial court had ignored several facts in its verdict, and called it a “clear and disturbing illustration of trial by media”, Hindustan Times reported.

“The appellant was projected and condemned as a lecherous person and a debauch,” said the appeal. “He was depicted as a serial womaniser and a rapist continuously, covering a major period of trial. He was, therefore, assumed to be guilty person much before the trial reached its conclusion.”

A Jodhpur court in April convicted the 77-year-old and sentenced him to life imprisonment for raping a 16-year-old girl at his ashram in 2013.