Agra : At least 29 passengers have reportedly been killed and several others were injured after a Delhi-bound bus fell in a drain on Yamuna Expressway on Monday morning.

The bus belongs to UP roadways and it was on its way to Delhi from Lucknow when it met with the accident near Agra.

The rescue operation was being carried out till last reports with the UP police reaching the accident spot.

"One Sleeper Coach passenger bus travelling from Lucknow to Delhi met with an accident on Yamuna Expressway. It fell into the side fall about 15 feet deep. 20 passengers rescued so far. Efforts are on for the rest," A Satish Ganesh, IG Agra said in a tweet. 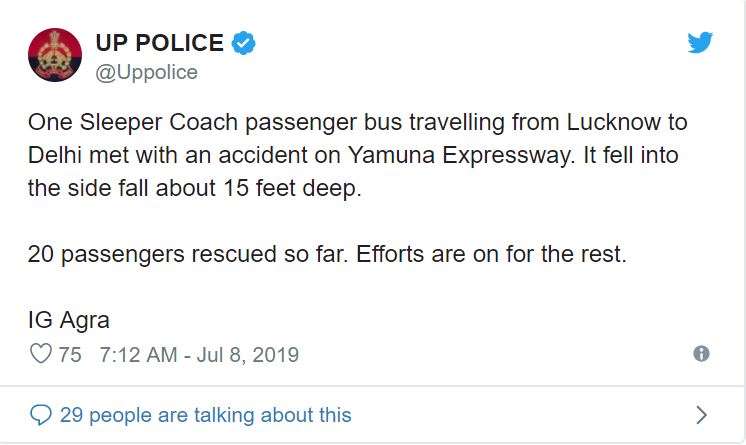 Uttar Pradesh Chief Minister Yogi Adityanath has expressed his condolence at the death of the passengers and directed DM SSP to provide all possible medical attention to the injured.

An ex-gratia amount of Rs 5 lakh has been announced for the kin of the deceased by UP roadways.