New Delhi : The Centre has decided to take back the SPG cover given to Gandhi family – Sonia, Rahul and Priyanka. However, they will continue with the Z+ security cover.

According to a media report, the security cover of Gandhi family will be taken over by the trained commandos of the CRPF. The report also mentioned that the decision to withdraw SPG cover has been taken on the basis of threat inputs assessed by the intelligence agencies.

In recent past, there has been no direct threat to the Gandhi family, according to sources.

Congress, on the other hand, slammed the move and claimed it to be a BJP's propaganda.

Congress leader Ahmed Patel tweeted, "The BJP has descended to the ultimate personal vendetta mechanism, compromising the lives of family members of 2 Former Prime Ministers to acts of terror and violence." 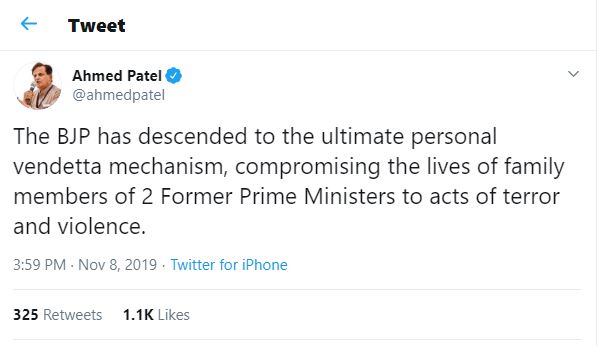