New Delhi : Soon after TikTok's rating fell drastically, credit to YouTube vs TikTok war among the social media influencers, the India version of similar app – Mitron – has taken the spotlight.

TikTok's rating fell from brilliant 4.5 stars to mere 1.3 stars in a matter of few weeks with many people giving it 1 star rating and negative reviews. Meanwhile, Mitron has seen a chance to shine. Made by IIT Rourkee student Shivank Agarwal, Mitron has more than 5 million downloads on the Play Store and rating of 4.7. 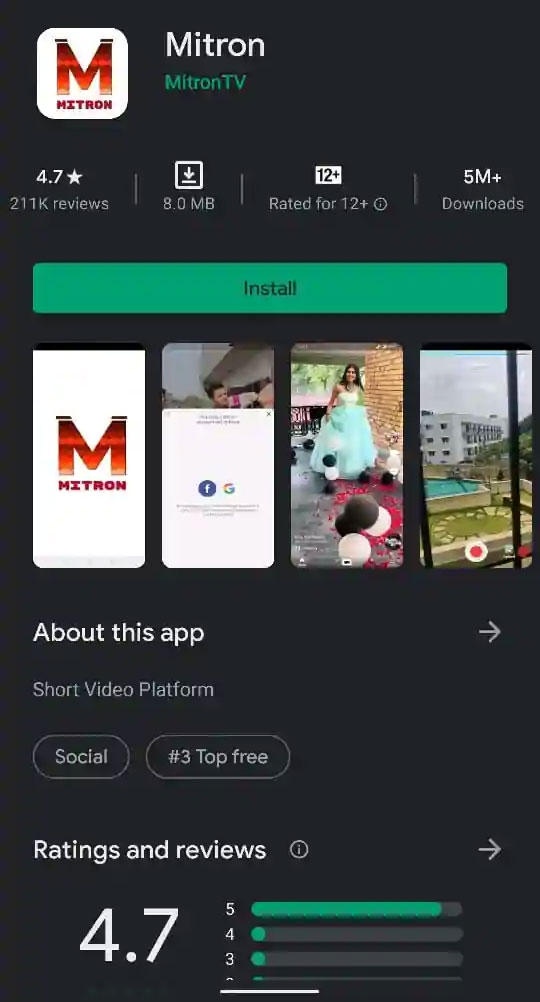 The app has been gaining popularity among mobile users while hashtags like #BanTikTok etc have been spotted all over social media.

With these 5 million plus, or 50 lakh downloads, Mitron is one of the fastest apps to touch this milestone worldwide.

Mitron works exactly on the same lines as TikTok does with its own set of filters, tools to edit short videos and share them on the platform. As is the case with TikTok, Mitron users have access to a wide library of multimedia content at their disposal. You can take a video and can sync it to any music clip or popular movie dialogue.

"Our mission at Mitron is to create a platform where people can come and entertain themself with small videos posted by people across the globe and at the same time create a social incentive for people to share and create their own videos," the Play Store descriptor for Mitron reads.

The current con with the application is that it works only on the android smartphones and can be downloaded from Play Store only.

Mitron is not available for iOS yet and there is no word on when it will be launched on the App Store. But given its growing popularity, the odds are that it might be soon.