New Delhi : Mahesh Babu's daughter Ghattamaneni Sitara has been confirmed as the voice for young Elsa in Disney's Frozen 2. Nithya Menen will bring to life the older Elsa, while Pulikonda Priyadarshi will voice Olaf.

Speaking about Sitara's association with the film, Namrata says, "Sitara has grown up to the tale of Frozen, and has idolised Elsa ever since. Her love for the movie is so much that when she was offered to voice young Elsa, there was no way we could turn it down. It’s a movie that every girl relates to, and Sitara is no different. We would like to thank the team of Disney for this wonderful opportunity. Sitara is extremely happy to be a part of the Telugu version of the movie, and has thoroughly enjoyed voicing her favourite character." 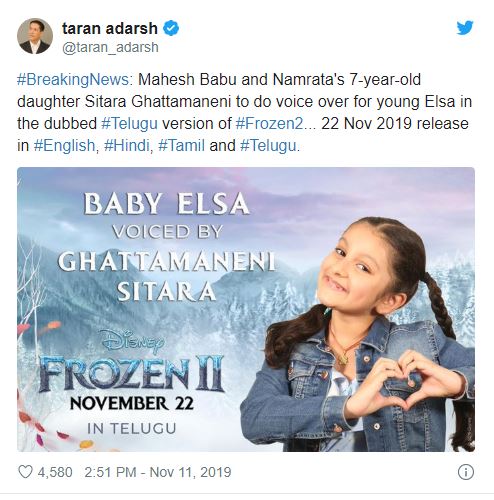 Frozen 2 is slated to release in English, Hindi, Telugu, and Tamil on 22 November.