New Delhi : After getting brutally bashed up on social media over her viral video in which she can be seen making a disgusting rape remark to a girl wearing short dress, the Delhi based woman has tendered an unconditional apology on Facebook.

Her Facebook post read, "I extend an unconditional apology to all the girls. In hindsight, I realise, I was harsh and incorrect in my statement. If any, I should have offered my opinion in private. I was concerned, however, I realize that I should have been protective and progressive in my outlook and not conservative and regressive. As a wife, sister and a mother and more importantly as a woman, I value every woman’s dignity. Once again, I profusely apologise to all women whose sentiments have been hurt." (sic) 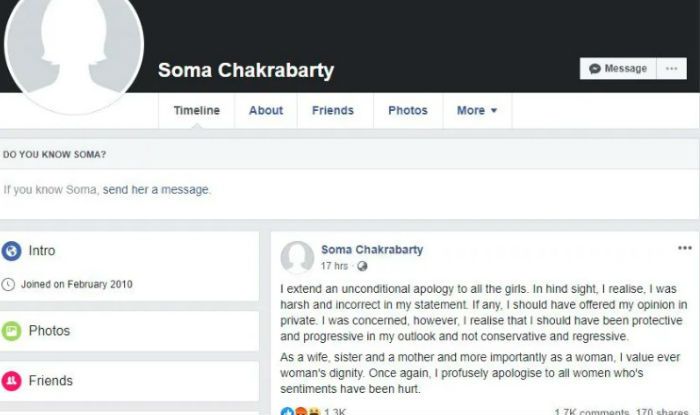 In her video that turned viral instantly, she was seen picking up a woman wearing short dress and telling her: "Excuse me, aapko sharam nahin aati aapke thighs dikh rahe hain.” Later, when the girls tried to defy her mindset, the woman turned to the group of seven men sitting nearby and asked them to rape the girl. She said, “Agar apko aise ladkiyan dikhti hain toh rape kar do."

The victim girl posted the video on her Facebook page explaining what happened in the mall.

Sharing the video, the girl writes, “Hey guys. Today my friends and I were harassed by a woman at a restaurant for me wearing a short dress. This middle-aged woman you’ll see in the video addressed seven men at the restaurant to rape us because she felt we deserved it for wearing short clothes and bashing her unsolicited opinion. For speaking up against her primitive mindset. Our instinct was turn away from the drama but supported by our colleagues, we took her on at a shopping centre, nearby. We gave her the chance to apologise, to no avail, of course. Nothing moved the needle for her, not even another woman who learned the story on the spot and implored the ghastly woman to apologise. See for yourself. And share.”