New Delhi : Virat Kohli turned 31-year-old on Tuesday, he celebrated his birthday with wife Anushka Sharma in Bhutan. While he was receiving wishes from all corners of the world on social media, Virat saw Yuvraj Singh's post on social media with a throwback picture. 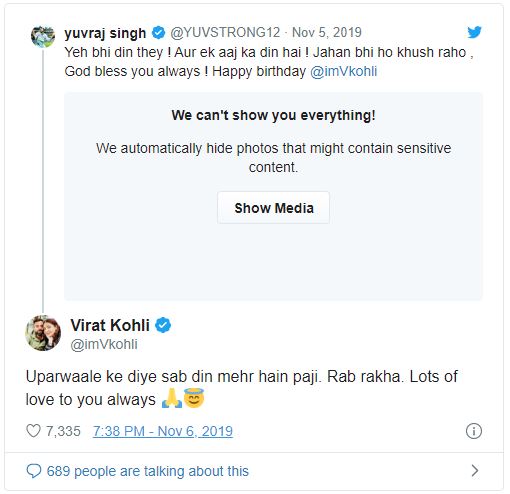 Fans were eagerly waiting for Virat Kohli's response on Yuvraj Singh's tweet ever since the latter posted the tweet.

One of the fans said, "And the way he responded shows how much he respects yuvi". Another fan said, "Virat is so spiritually inclined that anything he says now sounds like Guru's words!!"

On the work front, Virat Kohli is enjoying his break from cricket with friends and family. He is expected to return on the field during the Test match series against Bangladesh on November 14. The final match, which will be the first day-night Test hosted by India, will take place at the Eden Gardens in Kolkata from November 22.