New Delhi : Hours after reports surfaced in claiming that the Pakistan is planning to amend the Army Act in accordance to the International Court of Justice (ICJ) verdict in the Kulbhushan Jadhav case, Islamabad clarified that the reports are 'incorrect'.

Director-General of Inter-Services Public Relations (ISPR) Major General Asif Ghafoor in a tweet termed the news as “incorrect”. However, he added that various legal options for review and reconsideration of the case are being considered.

“Speculations for amendment in Pak Army Act to implement ICJ verdict regarding convicted Indian terrorist Cdr Kulbushan Jadhav are incorrect. Various legal options for review and reconsideration of the case are being considered. Final status shall be shared in due course of time,” Ghafoor said. 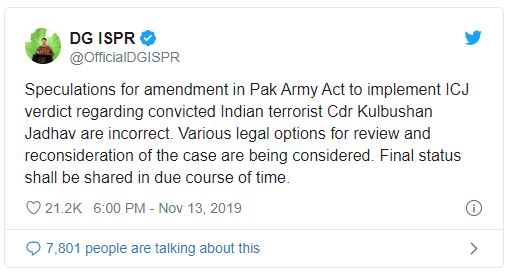 Earlier, in the day, Pakistan's media outlet ARY news placed high sources in its report to claim that the Pakistan is planning to amend the Army Act in Kulbhushan Jadhav case.

In a massive win for India, the ICJ, had on July 17, 2019, ordered a stay on his execution and further directed Pakistan to provide ‘indispensable condition’ for an effective review and reconsideration of his trial and conviction.