New Delhi : Mahendra Singh Dhoni-led Chennai Super Kings has once again secured the top spot in the Indian Premier League 2019 points table after it defeated the Delhi Capitals by a massive 80 runs on Wednesday.

Despite a slow start, Suresh Raina's 59 off 37 balls and Mahendra Singh Dhoni's match finishing inning prepared the course to a fighting total of 179 runs in 20 overs. Chennai Super Kings had scored just 27 runs in the powerplay overs.

Dismissing the Delhi Capitals for mere 99 runs, Chennai Super Kings have regained the top spot in the points table. Capitals suffered a surprise batting collapse after being consistent this season. They were out of the game after losing half the batsmen by 11th over and ended up suffering their worst defeat. It was also their lowest total of the season.

The @ChennaiIPL win by 80 runs and are now the table toppers in the #VIVOIPL Points Table 🔥🔥 pic.twitter.com/LBXa118JlK

With 18 points in hands, Chennai Super Kings is now sure to stay in top 2 position before the semi-finals and final. Mumbai Indians is the only team which can displace Capitals (16 points) from the second place if they win their next two games and Delhi lose their last.

Mahendra Singh Dhoni was selected as the Man of the Match for the game.

#Thala MS Dhoni is the Man of the Match for tonight's game 🙏🙏 pic.twitter.com/jime9Dlko4 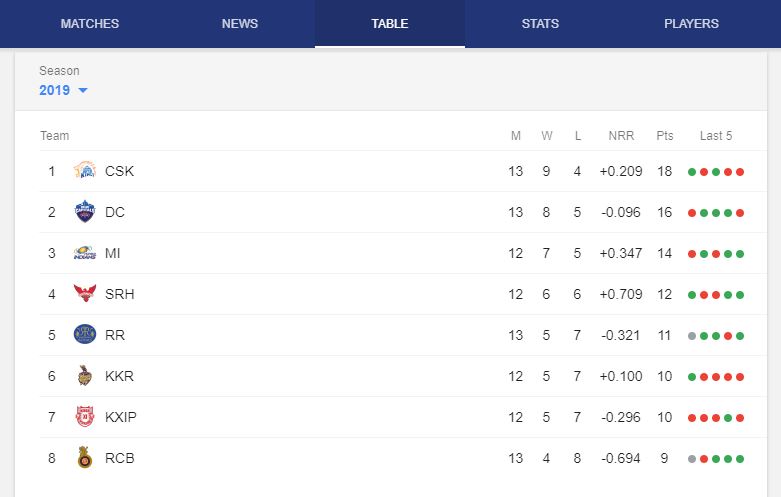